It was 10:30 in the morning, and the sun was hot enough to make me feel as though my brains were gently steaming inside my head.

My bicycle was loaded down with enough gear to allow me to ride as long as their was land to keep pedaling across.

I had just arrived in Playa del Carmen, Mexico, and I was looking for an apartment number on Calle 20 North. As I rolled down the one way street, an older, extremely tanned American couple overtook me on their city bikes.

“Where are you coming from?” the man asked me, smiling happily at my alien appearance.

I smiled back. “Well, today I just rode down from Chemuyil. But I started in Austin, Texas.”

We chatted for a few more minutes, than it was time for them to turn right and for me to re-assess my directions. I was pretty sure I had already passed the apartment I was looking for.

I pulled up a map on my iPhone and saw that it was back a few hundred yards from where I had just come.

Another American man was standing on the sidewalk, watching me. I hadn’t seen so many white people in months.

“Let me help you,” he said, waving me towards him. “Just show me where you’re trying to go. I’ve lived here for 11 years.”

I sighed, but humored him. Chances are giving directions to a cycle tourist would make this guy’s day, and I didn’t want to deprive him of the opportunity.

I pulled up to where he was standing and showed him the map. “Here’s where we are, and here’s where the apartment is.”

“What? But the directions say it’s a 2 minute walk from here!”

He turned the map sideways, than upside down. “Oh ok…” he squinted his eyes. “Okay, it’s just down the street, back that way, on your left.” He gestured and pointed importantly, assuring me it was very close and easy to find.

I smiled wanly and took my phone back from him. “Thanks.”

In 2 minutes I was pulled up in front of the apartment building. I sent a Whatsapp message to my friend Watson: Hey dude, I’m outside your door.

Within minutes the broken, plastic door at the entrance of the apartment building opened, and Watson stepped out into the bright sunshine, his hair sticking up in gravity-defying directions.

“You got here fast! I just rolled out of bed like a half hour ago!” he laughed, and we embraced.

“I told you I was going to leave early this morning. Didn’t want to get caught in the heat. I was out the door by like 7:30 am. Rode like a bat out of hell.”

He was gazing at my bicycle and gear, smiling appreciatively. “Well, here it is! Your bicycle!” He looked at me again. “And you have a GoPro!”

“Duh,” I laughed. “How do you think I’ve been making all of those videos?”

“Watson,” I said, taking off my helmet. “I rode my bicycle across Mexico.”

“Yeah you did,” he laughed. 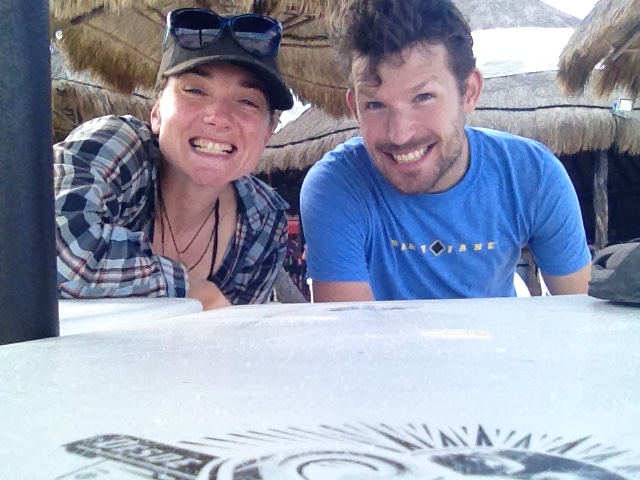 “And now I never have to do it again.”

We unloaded my gear and rolled my bike inside. Watson lived with three other housemates in a downstairs apartment. We shoved all of my belongings into a corner in his room.

“Well, this is where we’ll be sleeping,” he gestured to a rumpled, full-sized bed in the corner. “I get really hot in here at night–there’s no AC–so just stay on your side!”

That afternoon we walked to the beach. There were white people EVERYWHERE. Tourist shops, people jabbering in english, and the beach was packed. Every 30-40 steps we were invited to receive a massage by a guy or girl in a little uniform. They would wave and gesture us over to the massage tables under a tent or on a deck area, and we would politely decline. “No gracias.”

We eventually found a less crowded area, and dropped our stuff down in the sand. The ocean was a shocking blue. 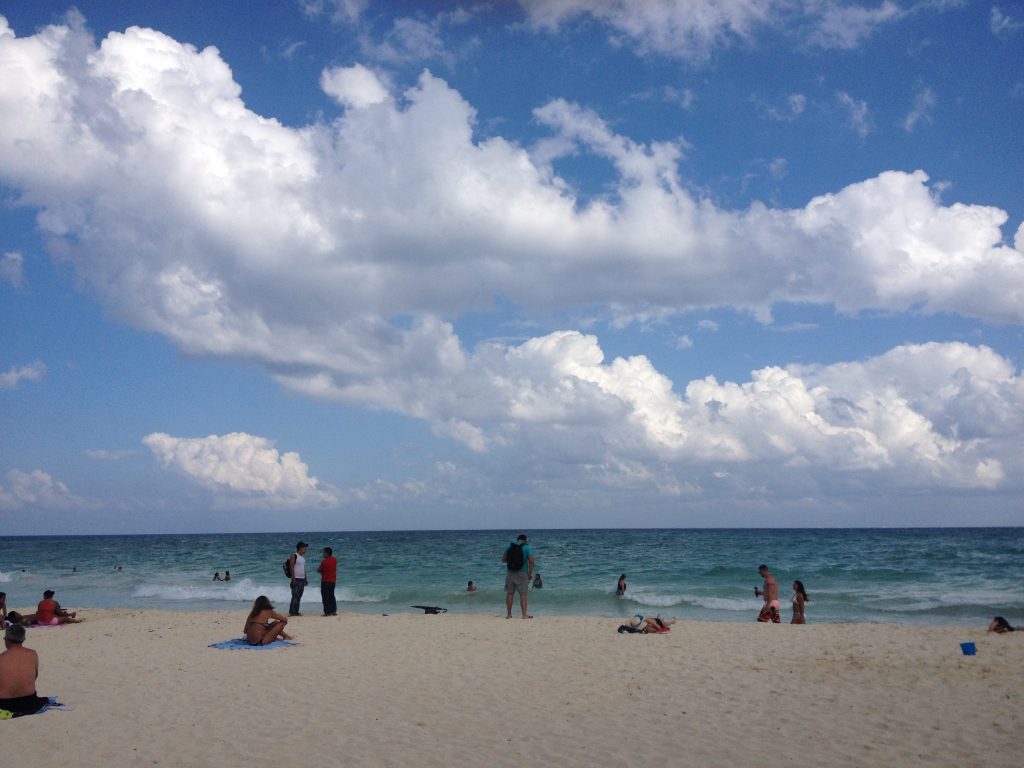 I stripped down to the my bikini, and Watson, ever the faithful observer of women’s bodies, said: “Wow, your boobs are huge. Definitely bigger than last time I saw you.”

“Well jeez, usually most women are happy to hear that!” he laughed.

I had been traveling alone and there had been no one else who knew me well to stand back and look at me and say, ‘Jahnavi, your boobs look bigger than usual.’

Ever since I had arrived in Villahermosa (after taking the bus from Mexico City to there), I had noticed that I was having really intense PMS symptoms; but even after being a week late, my period still didn’t not happen. Every day I was sure that ‘THIS is the day’ I start my period and I would have to either ride all day bleeding or hole up in a shabby, Mexican hotel and wait for the storm to pass.

Finally, after weeks of ‘I’ll be starting my period any day now’, I gave up. I had officially missed my period, for the first time in my adult life.

I told my sister this over the phone. “Well that’s not a big surprise,” she said. “You’ve been exercising like mad. Your body just doesn’t have TIME to have a period.”

But why am I still having PMS symptoms? I wondered. I had been crying everyday, and had even begun to feel nauseous and tired over the past week.

I explained all of this to Watson.

“All the signs seem to be pointing to that, yes…” I sighed miserably.

We waded out into the blue ocean waters and I dove under a wave. Being in the salty water was incredibly rejuvenating. Watson continued to make ridiculous comments about my boobs, and I laughed for the sheer joy of laughing.

“I haven’t laughed in so long Watson,” I told him, jigging and splashing in the water, and laughing some more.

Afterwards we stopped at a beachside bar and jammed with a local musician:

That night, during dinner, we discussed my theoretical pregnancy. Watson gazed around the restaurant, resting his eyes on a chubby, curly haired toddler at the next table over. “That could be yours,” he whispered to me, smirking mischievously.

I widened my eyes at him threateningly. “STOP it. We have no idea if I’m pregnant.”

“What is Addison going to think?” Watson went on, staring at me earnestly.

“Addison would not be happy,” I admitted sadly.

Watson wanted to take me to his favorite bar after dinner, but I was suddenly reticent to consume alcohol. I had lost interest in drinking alcohol in the last month, and with how nauseous I had started to feel, it seemed even less appealing. And what if I WAS pregnant??

“Watson…” I began. “What if I AM pregnant? I shouldn’t drink alcohol if I am! Maybe I should take a pregnancy test first…”

We were both tickled by the idea of strolling down the street, buying a pregnancy test, and then sending me into the bathroom of the bar to check if I could drink or not.

We walked across the street to a pharmacy. “I don’t even know how to say ‘pregnancy test’ in spanish!” I told Watson.

She nodded, and mimed a big pregnant belly on herself.

“Maybe I should hold your hand,” he suggested.

I can’t believe I’m taking my first pregnancy test in a bathroom in Playa del Carmen, Mexico, I thought, looking at my reflection in the mirror in disbelief.

I read the directions in spanish, and looked at the pictures. I think I got this.

After peeing on the test stick, I waited.

Immediately, one line formed, and than a second, very faint line.

Hmmm… it says that if there are 2 lines, it means I’m pregnant. But the second line isn’t really a line… it’s so much fainter than the other.

To my surprise, I felt disappointment wash over me.

I’ve been fighting off baby fever for almost 10 years, and I suppose the idea that I was finally pregnant (and with Addison’s baby, someone I was truly in love with) had apparently been a small hope I had carried with me for the past few weeks.

I waited another 5 minutes, hoping the second line would darken and tell me that I was pregnant.

I rinsed off the stick and tossed everything in the garbage. Sighing, I opened the bathroom door and saw Watson watching me furtively from his table. I walked up to him, smiling at the look on his face.

I shook my head. “Negative. I’m not pregant.”

Watson broke into a relieved chuckle. “Ha ha, alright!” He held up his glass of whiskey. “Here’s to you not being pregnant!”

I wasn’t feeling celebratory, but I appreciated his enthusiasm, and took a sip from his glass. Watson went to get us more drinks.

I looked around the bar at all of the tourists, imagining what their different stories might be, and why they had ended up in that bar.

I thought about why I was disappointed to not be pregnant…

I felt like my relationship with Addison could have been saved by a baby… but now… I didn’t know. Besides, having a baby as a way to save a relationship does not seem like a good idea. And I still need to get to Brazil. So this is for the better.

It wasn’t just my relationship with Addison I was feeling like saving… it was also the life I had left behind in Austin. Our band, our awesome pets, yoga, capoeira, meditation. I could still live in Austin and play music without Addison, could still have pets and do yoga and capoeira and meditate… but I liked doing those things WITH him. I liked our lives when they were combined. We were always scheming and coming up with new projects and ideas, and we loved going on adventures together, whether by bicycle or hitting the road on tour with a car full of musical instruments.

Addison was going to be in Playa del Carmen in just 2 more days.

P.S. Here’s a bonus video of some of the inner-goings-ons of Watson and I’s time together: